Years ago, watching a documentary on the Galapagos Islands, I was enamored with the idea of an isolated place with species of animals found nowhere else in the world.  At the time it was a distant place in another world, an unattainable paradise. When Trin and I walked off the plane onto Baltra island I elbowed him and excitedly said, “We are in Galapagos!” Our goal was to see as many of the endemic animals as we could.  We wanted to see the Blue-Footed Boobies, Red-Footed Boobies, Iguanas, penguins, Flightless Cormorants, giant tortoises, and more.  Also, we really wanted the chance to swim with hammerhead sharks who are known to hang out around these islands. Edgar, who would be our guide for the next eight days, was at the airport to greet us and escort us to the Itabaca channel.  From there we hopped onto a small dinghy that took us aboard the Floreana, a 72-foot yacht that can accommodate 16 passengers. Our cabin contained a bunk bed, a small shelf, and a private bathroom.  There was just enough room to change and house our one backpack.  But it wasn’t the room we were excited about, it was exploring the islands. At lunch, we met our other shipmates which included a couple from Spain, three Chinese men, a Canadian, a Brit, three Americans (two were us), two Dutch couples, and a German. After lunch, we went to the Santa Cruz highlands to visit giant tortoises. 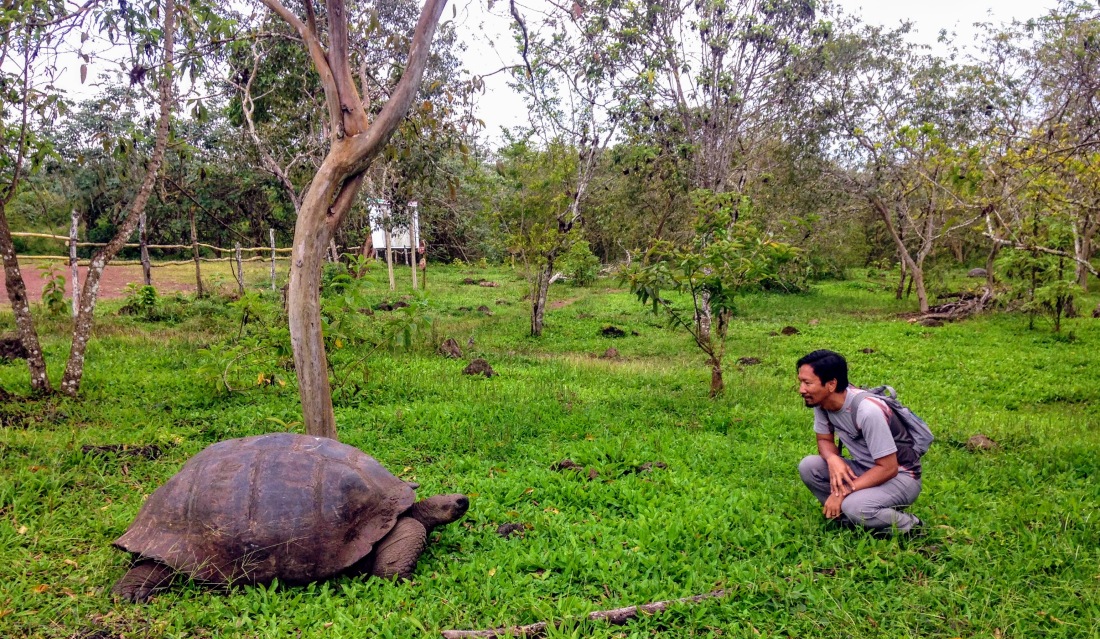 The lower portion of Santa Cruz island is lava rock.  The air is dry and hot like the Arizona desert.  As we ascended to higher elevation the air cooled and soon after fog closed in around us.  Along with the cooler, moist air greenery began to appear in larger and denser quantities. By the time we reached the top, no more than 800 meters above sea level, we were enveloped in a mist, in an ancient world where giant tortoises roamed free. We wandered through the green trails watching tortoise after tortoise who were munching on grass or relaxing in the mud.  Edgar told us that not only do they live up to 150 years they can take up to four hours to mate! 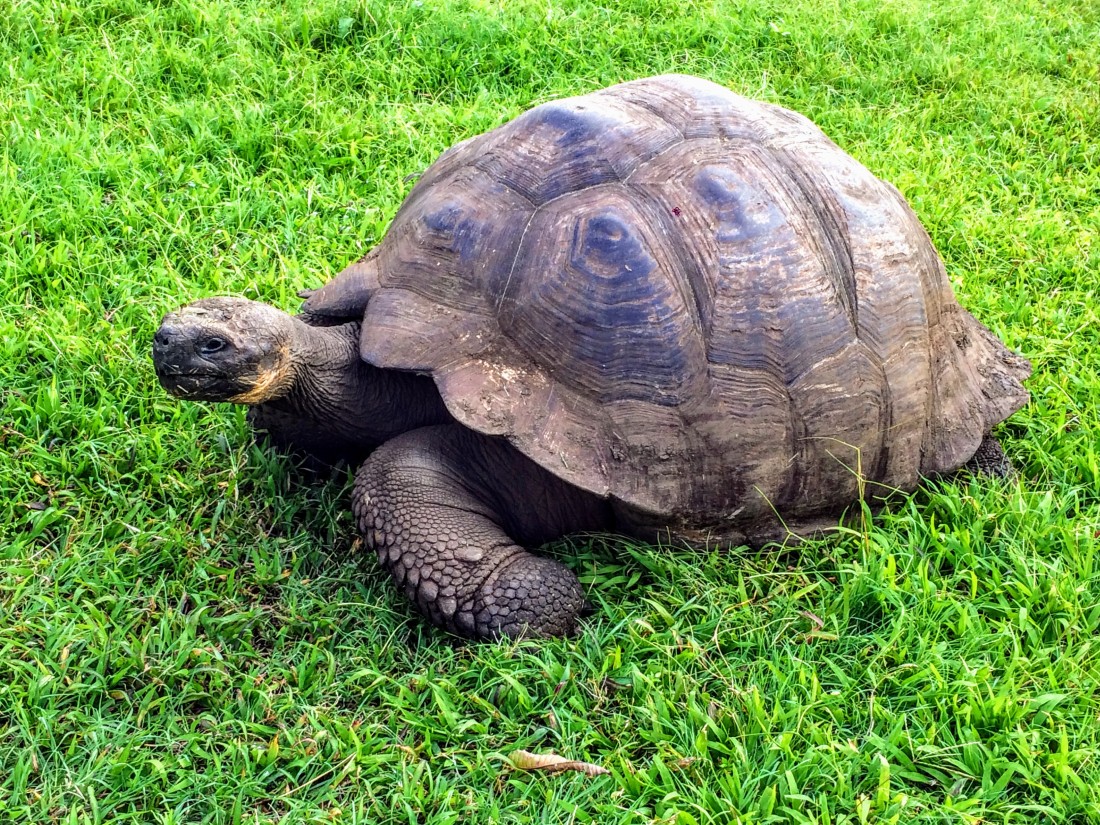 That evening while we slept the yacht sailed toward the remote island of Genovesa, a seven-hour ride over rough seas.  We could hear the waves crashing against the metal side of the boat.  A few times we were awoken as we were nearly tossed off the bunk after the boat hit a wave.  I heard a glass slide in the mess hall and crash on the floor.  For the most part, however, we slept well as if in a rocking hammock. Neither of us got sick. When I awoke in the morning I stumbled over to the porthole in our bathroom and looked out the window.  Beside the boat was a cliff with flocks of birds that looked like small Pterodactyls.

Frigatebird
These seabirds were gliding through the air and gathering at the top of the cliff on dry branches.  We would soon identify these birds as the frigatebirds. Frigatebirds are thieves.  They don’t fish well or at all, so they follow the other birds around and steal their fish.  They also accompanied our yacht when we set off into the ocean, gliding in our draft for a long time waiting for lunch leftovers to be dumped into the sea.  They are really cool to watch. When the males are looking for a mate they blow out their “red beard.”

Image Credit: E. Kirdler, US Fish and Wildlife
That first morning at breakfast Kay, who lives in New Hampshire, was looking a bit green.  Kay and her friend Matty, the Canadian, were on vacation together.  Kay often spoke of her grandson and the animals she needed to get a picture of for him.  She would definitely be a cool grandmother to have. Thankfully after taking some motion-sickness medication, she avoided major sickness the rest of the trip and indeed became a joyful mate with her excitement over being in Galapagos. Matty is a true adventurer.  She has not only visited some amazing places, but she has also led expeditions to both the North and South Pole.  She was humble about her accomplishments, in fact, it wasn’t until after the cruise that I found out she not only lead these journeys but is a world-renowned guide with numerous record-breaking expeditions.  I’m excited to read her book about leading the first all-women team to the North Pole, On Thin Ice: A Woman’s Journey to the North Pole.

We spent the day exploring Genovesa Island.  This island is a birder’s paradise.  Even for Trin and I who have not gotten into birds much, it became one of our favorite islands. We went ashore to a beach in Darwin Bay where there were Red-Footed Boobies and Nazca Boobies everywhere. They showed no fear of humans.  We watched them mating, we watched them warming their babies, we watched as they walked with their lumbering, side-to-side gait down the beach.  As I leaned in close for a picture of one booby he cocked his head to the side seeming to be just as curious about me as I was of him. 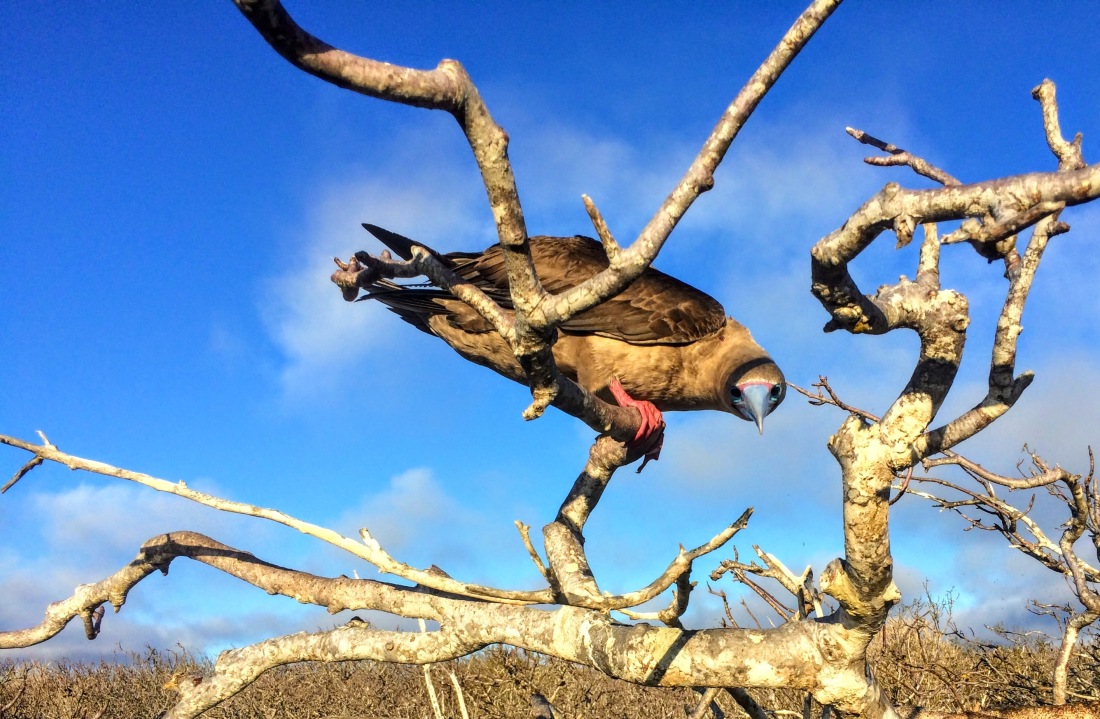 In the late afternoon, we made our way to El Barranco, also known as Prince Philip’s Steps, which are steps carved into the side of the cliff.  As the dinghy motored near the cliff the operator kept yelling, “look for the boobies”.  My childish mind snickered, but I did as he said and looked for the birds along the cliff, and they were aplenty.

At the top of the cliff was a wide expanse of palo santo vegetation that seemed like a bird village.  We walked along the trail feeling like we were walking along their neighborhood; the male Nazca boobies whistling, the females squawking. In the middle of the trail, we watch a male booby preening his baby who was as yet covered with fluffy white feathers. Later down the trail, we watched a male Nazca Booby trying to woo a female by bringing her sticks. This island is home to red-footed boobies, frigatebirds, Nazca boobies, Galapagos doves, and lava owls.  Its beach is also a paradise for the sea lions.  They swam out of the water to sunbath on the beach near us.  We watched as a baby suckled its mother and they were not bothered by our presence. This video is only 28 seconds but turn on your sound to hear the cool sound of the Red-footed Booby. Galapagos is a place unlike any other.  The animals here are highly protected and they know that humans are not a threat.  It creates a small paradise of peace and an interaction with nature rarely seen elsewhere. We were also very blessed to have a great group of travelers on board the Floreana. Indeed one of the highlights of the cruise was the other passengers on our ship. Watching for the green flash as the sun dipped into the ocean while on deck talking with Matty, the arctic expeditioner, about life, are the moments I cherish just as much as swimming with sharks and sea lions. More about the sharks and sea lions in next week’s post, but here is a preview of the Sea Lions – go ahead and say “awww”. 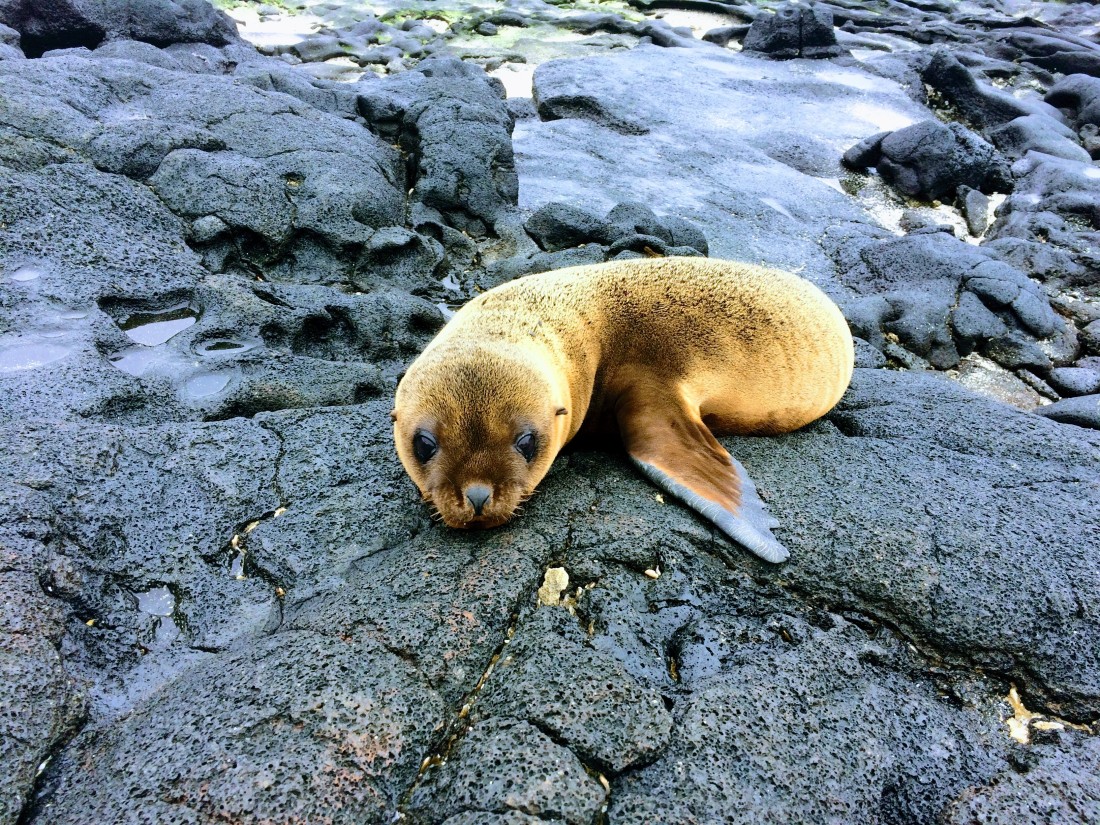 Day Trips Or Cruise There are 13 major islands and 7 smaller islands in the Galapagos archipelago. Our research on what to visit and how to visit was a bit overwhelming at first.  Do we base ourselves in Santa Cruz and take day trips to the other islands, or do we island hop? Or do we take a cruise that stops at many of the islands? We definitely wanted to see Isabela Island and since we love to hike, at first we thought maybe we could hike around it.  No, not possible.  Much of it is remote with no trails, more importantly, most of it is protected area and visiting many of the bays require a permit and a guide.  We quickly realized that if we wanted to see some of the farther destinations a cruise would be best. We decided on an 8-day cruise that would visit the North and West portions of the archipelago. After the cruise, we based ourselves in San Cristobal and took day trips to the remaining locations.  To get a good deal we began our search for last-minute cruise deals, then booked our flights from Quito.

Retired from Corporate America at the age of 43 along with her husband Trinity. In 2016 they sold their home to begin a nomadic life of slow travel. Bonnie writes of their experience on the road in each country.  Subscribe to follow her stories here.

Check out these related posts

8 thoughts on “Look for the Boobies! The Galapagos Islands”

© 2020 All Rights Reserved - No portion of any content in this domain may be modified, copied, reproduced, sold, or distributed in any manner or medium without explicit permission from the author.

You can find out more about which cookies we are using or switch them off in settings.

This website uses cookies so that we can provide you with the best user experience possible. Cookie information is stored in your browser and performs functions such as recognising you when you return to our website and helping our team to understand which sections of the website you find most interesting and useful.

Strictly Necessary Cookie should be enabled at all times so that we can save your preferences for cookie settings.

If you disable this cookie, we will not be able to save your preferences. This means that every time you visit this website you will need to enable or disable cookies again.